It has become something of a mantra that ‘things cannot be the same’ after the Coronavirus pandemic. This is partly because of a growing sense that if, as seems likely, the Coronavirus pandemic will be with us for some time, we won’t be able to work, shop, learn and socialise as we used to, even when we ease out of ‘lockdown’. But more positively, the pandemic has afforded glimpses of how things could be different. For example, the speed and extent of some of the responses by the governments of the UK, like the furlough scheme or the rapid commissioning of emergency accommodation for rough sleepers, have suggested that the state has a capacity to act radically, swiftly and imaginatively.

Small wonder, then, that the past three months have seen a flurry of creativity from think-tanks, interest groups, charities, and academics.  From Universal Basic Income, to changing the way we think about higher education, to deregulating pay differentials, policies have been proposed as answers to problems which the pandemic has thrown up, or has revealed, in the hope or expectation that they will be heard by policymakers looking to address these issues.

However, few, if any, of these proposals are new. It is far more likely that their advocates have promoted them for some time and have identified a new opportunity to present them as relevant and necessary. It should be emphasised that there is absolutely nothing wrong with this. What is happening is that people who believe in a policy proposal have found another ground on which to argue for it. Another problem to which they believe it offers a solution. They are, in short, doing exactly what you would expect policy entrepreneurs to do.

The figure of the policy entrepreneur is central to the Multiple Streams Framework approach to policy analysis, originally developed by the American scholar John Kingdon. Kingdon argued that rather than policies (always) being generated in response to identified problems, policies and problems exist in ‘streams’ which are independent of each other. And running alongside them is a third stream – politics – consisting of a huge range of factors which might make a government or legislature willing to act on an issue.

It is when these streams come together – when a policy meets a problem to which it seems to be an answer and the politics stream is favourably disposed to action – that a window of opportunity or change opens. But the streams do not come together by themselves: they are brought together by policy entrepreneurs – people or organisations who have a policy or position that they believe in (or, sometimes, from which they think they will benefit) and who are willing to put their time, energy or other resources into trying to get it adopted. Kingdon memorably quoted an image of policy entrepreneurs as:

But, to extend the metaphor, the point is that the surfer doesn’t build her particular surfboard to ride a particular wave: she already has the surfboard and looks for the wave that will allow her to show how good a board it is.

Again, there is nothing cynical or dishonest about this. If you have an idea or a policy whose value you believe in, you will naturally want to show, if you can, how it will help solve the problems  to which policymakers are seeking answers. For example, Universal Basic Income has been variously offered as an answer to poverty and income inequality, to concerns about social cohesion, to labour market changes following large scale automation, and, now, to the challenges of building a better society after the pandemic. All of these are arguments which deserve to be engaged with and other, equally serious, ideas have been promoted in similar ways.

Multiple Streams policy scholars argue that policy entrepreneurs are valuable to policymakers because the narratives that they frame can help reduce the range of policy options to a manageable size. In a world where officials and politicians have limited time and space to process information and think about alternatives, this can be an important role. But could the Coronavirus pandemic be a chance to make policy differently?

As we think about how things should change after the pandemic, policymakers might be able to take more time to engage critically with proposals for change. Looking beyond the immediate claims made by policy entrepreneurs, they might, for example, commission evidence syntheses or local trials to see how proposals might work in practice. If reasoned arguments against change are not immediately forthcoming, they might actively seek them out and weigh them up.

An opportunity like this, if it does exist, will not last, because there is never enough time or capacity to consider everything that a government could do. Policymakers will always need to find ways of focusing their efforts. But if ‘things cannot be the same’ is a mantra for where we want to be when we emerge from the pandemic could it also be a mantra for the way that we get there? 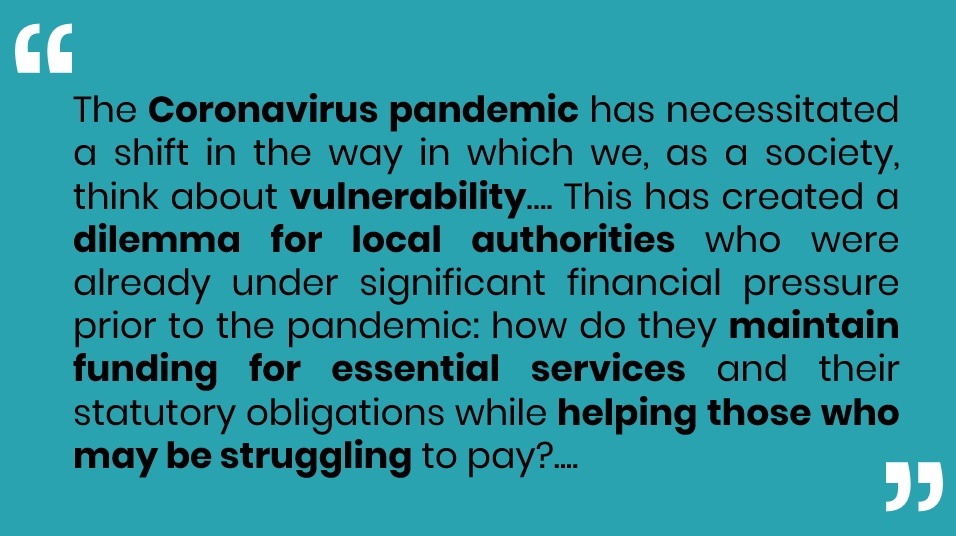 Read more in our next blog in this series: Financial vulnerability in the pandemic: a dilemma for local authorities

Building back better: the importance of a green stimulus

The Coronavirus pandemic-driven lockdown imposed across the UK has upended most aspects of day-to-day life. Whilst the economic cost of the lockdown is severe, one...
Commentary 27 May 2020

The implications of the Coronavirus pandemic for the Welsh economy

The Coronavirus pandemic is having a profound and unprecedented impact on the Welsh economy – an economy already weakened by retrenchment and austerity in the public...
Commentary 12 June 2020

The role of Welsh local government in a post-Coronavirus world

The role that local government plays in the frontline provision of public services is highlighted and accentuated at times of crisis. Councils across Wales have...
Commentary 10 June 2020

Recovering from the Coronavirus pandemic: maintaining a legacy of volunteering

One of the few positive side effects of the pandemic has been the apparent eruption in volunteering we’ve seen across Welsh communities – both in...