Responding to those in difficulty with council tax debt in Wales: what does the evidence show?

This blog draws on a recent Wales Centre for Public Policy (WCPP) report ‘Responding to citizens in debt to public services: A rapid evidence review’ co-authored by Sharon Collard from the University of Bristol with Helen Hodges and Paul Worthington from WCPP. It looks at how local authorities and housing associations in Wales might better respond to people who have council tax or rent arrears, paying particular attention to the citizen’s experience of debt.

At some time or another we can all get behind on credit card payments or other bills. Despite their best efforts, for some households these debts can mount up, especially if there is an unexpected bill or a change in the amount of money coming in. Currently around 67,000 households in Wales have problem debts, and  these can be a source of great anxiety, affecting the health and the welfare of those affected. Over the last decade the number of households in debt to public bodies in Wales has been increasing and now significantly outweighs those who have outstanding consumer debts, such as credit card bills.

One particular challenge is the money owed to local authorities in outstanding council tax payments.  As local authorities in Wales have found their income from Welsh Government reducing they have increased efforts to maximise the amount of council tax they collect – with 97% of billed council tax collected in 2018-19 – and raised the level of the council tax charge itself.  The increase has generally exceeded the rate of inflation; the Band D average rose from £1,044 to £1,591 (around 52%) between 2008-09 and 2019-20.This can exert additional pressures on households already struggling with debt repayments.

In March 2019 households in Wales owed some £94m in council tax debts, around 6% of council tax revenues. As Figure 1 illustrates, this marked a small rise in the overall amounts owed across Wales from the situation ten year earlier in 2009, and follows a number of years where the levels of council tax debt remained relatively stable but still significant.

Evidence from local authorities in Wales suggests that the legislative framework governing the collections process had ensured some level of consistency and uniformity and some of its success in terms of improved collection rates lay in the flexibility it afforded them to adapt collection and recovery processes to suit local needs. However, as collection rates have improved, the capacity for further improvement has become more challenging and resource-intensive, focusing on a smaller number of households or individuals and delivering smaller gains.

However, as Figure 2 shows, the overall level of arrears masks some strong variations between local authorities in Wales.

Figure 2: Council tax in Wales; Amounts outstanding per chargeable dwelling, at 31 March 2009 and 2018 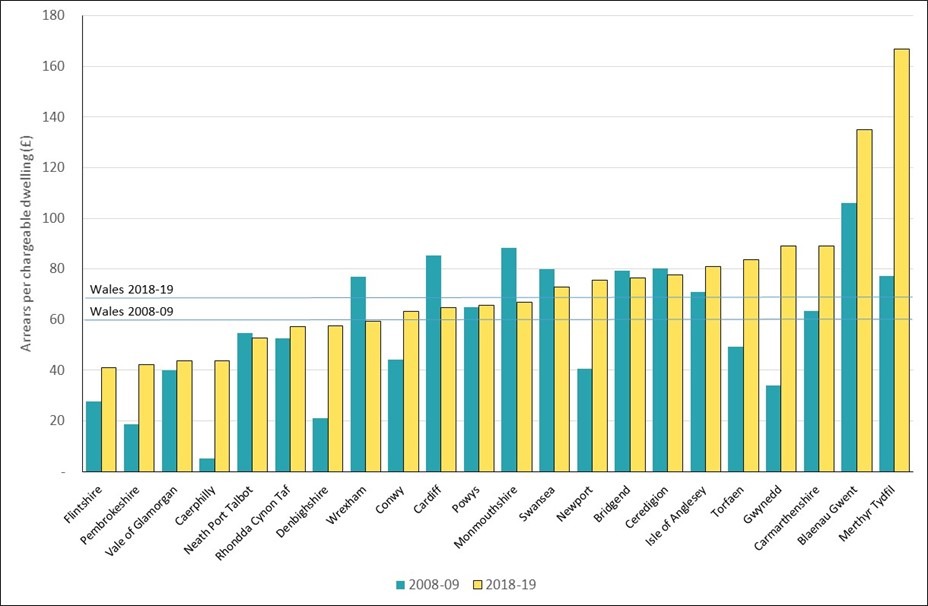 Our work finds that local authorities tend to respond to missed council tax payments through rapidly instigating legal proceedings.  In 2016-17 Welsh magistrates’ courts granted 92,547 liability orders on council tax debt.  In the more serious cases, 326 applications were made by local authorities to commit the debtor to prison.  Whilst the Courts imposed a prison sentence in just 20 cases and suspended sentences for a further 159, the very application for committal can cause anxiety and stress for vulnerable households. In recognition of this, Welsh Government has recently introduced regulations that remove imprisonment as a sanction for council tax non-payment.

Defining and identifying vulnerability can be difficult; it can be multi-faceted, applying to a wide range of circumstances such as physical or mental health problems, age or social isolation. This can pose challenges in targeting and providing support. Research shows that although Welsh local authorities  do take account of vulnerability this tends to happen late in the process, often due to the high volume of accounts they deal with or the reluctance of tenants to come forward.

If local authorities were able to identify vulnerable households earlier in the process, they could adopt a different approach and possibly avoid costly enforcement action. The recent introduction of the Council Tax Protocol for Wales is designed to address that. Developed by the Welsh Local Government Association, local authorities in Wales and Welsh Government, the Protocol outlines best practice and guidance around how to deal with vulnerable customers.

Key features of effective help include better engagement with citizens, easy to follow bills and letters, identifying problems and intervening early, and access to independent and specialist help. There is a foundation for further action and innovation in Wales, building on existing good practice among local authorities and other social housing providers. However, it is not clear how widely this knowledge base is used across Wales. This risks a potential postcode lottery in terms of fair treatment of people in debt.

There are also opportunities for greater collaboration in areas such as front-line staff training, and recent legislation has opened up possibilities for better data sharing for LAs with other appropriate organisations. This could help identify people with vulnerabilities who may be eligible for support.

For local authorities, there will always potentially be a challenge in reconciling their need to collect outstanding debt with the desire to support those individuals experiencing difficulties in paying council tax. A consistent message is that personalised and proactive support works better than a generic, ‘one-size-fits-all’ approach. The test of the Council Tax Protocol for Wales will lie in the quality and consistency of implementation, but also in the tangible impact on those at risk of council tax debt.

Why We Need Evidence on Poverty

Poverty is a long-standing and apparently intractable problem in Wales. Around 23% of population, some 700,000 people, live on household incomes of less than 60% of the median....
Commentary 19 July 2016

On a visit to Beijing in 2015 I met the Chinese Vice-Minister for Rural Development. A jovial man, who looked back fondly on the two years...
Commentary 28 July 2016

What will Brexit mean for Wales?

On 23 June, the UK voted to leave the European Union. The process for leaving and the implications for Wales are uncertain, but broadly speaking there...