The Coronavirus pandemic and the cost of health

The current Coronavirus pandemic has brought healthcare and science experts to the centre of public debate. Questions about rationing resources such as access to specialist healthcare, testing, and availability of personal protective equipment (PPE) are being discussed daily. There has been talk of rationing access to beds and treatment, with Italian and Spanish frontline healthcare staff having to make life or death decisions based on the availability of staff and equipment rather than clinical need.

The question of rationing healthcare is not a new one. Driven by health economics, it has been debated for decades in the UK and elsewhere. From access to renal dialysis in the 1970s, heart transplant procedures in the 1980s and, more recently, expensive cancer drug treatment, the NHS has frequently been faced with the dilemma of how to deploy limited healthcare resources in the face of spiralling demand.

The present crisis presents an opportunity to re-examine how healthcare has become dominated by health economics. In Wales, as in other parts of the UK, the availability of treatments and decisions on who can receive them has become increasingly influenced by economics concepts and methods. As Richard Horton, editor-in-chief of the Lancet, wrote in an editorial in 2017:

‘Economists are the gods of global health… their dazzling cloak of quantitative authority … silenc[ing] the smaller voices of medicine’.

Wales hasn’t followed England’s use of competition and quasi-markets to try to control costs, but how to meet the growing demand for healthcare has been a major political issue here with several health boards struggling to deliver high quality care and remain within their budgets.

There is evidence that even before the creation of the NHS in 1948, the state was alert to the ‘cost’ of illness. For example, in 1943, a poster (image below, Science and Society Picture Library) was produced with the headline ‘How much does a cold cost?’. 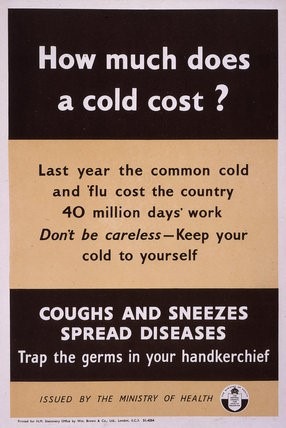 By the 1970s, health economics had the potential to offer a convincing yet simple supply-demand narrative to politicians: healthcare was provided on the basis of limited resources (e.g. medicine, nurses/doctors, beds) but experienced bottomless demand (i.e. people’s expectations of health were growing). Solutions put forward involved setting rationally-determined and ‘objective’ frameworks for decision-making through cost-benefit calculation techniques, identifying individual preferences and evaluating the performance of services.

Health economics has since then become part of how healthcare is formulated, delivered, and evaluated. For example, quality-adjusted life-years (QALYs) (see figure below), an economics tool developed to evaluate the cost-effectiveness of treatments, bring together morbidity and mortality in a single ratio to evaluate the outcome of health interventions. The question asked by ethicists is whether considering life years gained and left to gain ought to be the basis for decision-making during this Coronavirus pandemic. Indeed, since the formulation of QALYs by British economists in the 1970s, there have been criticisms that it is an ageist and disablist concept. Never have these criteria been more visible as they are now.

Despite health economics appearing to play a growing role, some researchers have compared and evaluated whether the discipline actually impacts on funding decisions. They suggest that although the discourse of health economics appears dominant, ‘health economics evaluation, however, seems to have had limited impact on restricting access and/or explicit denial of controversial drugs’. This symbolic value of economics – with its supposed objectivity and value neutrality – in a contested policy area such as healthcare is useful in depoliticising resource allocation. Political decisions are repeatedly described as ‘being led by science’, yet, different ‘sciences’, forms of expertise and evidence, will frame problems differently, with different solutions.

A helpful body of research for examining the role of economics in healthcare is found within the depoliticisation literature which argues, notably, that governments may seek to depoliticise decisions by delegating them to arms-length bodies.  Matthew Wood for instance argues that the UK’s National Institute for Health and Care Excellence (NICE) fulfils this function in health policy and benefits from what he calls  ‘institutional “double glazing”’ which prevents ministerial intervention in its work (2015, p.646). However,  this double glazing is only as strong as governments want it to be, with the potential for it to be ‘shattered’ in the face of overriding political pressures. One example is the English Cancer Drugs Fund in 2011, which bypassed NICE’s recommendations for certain cancer drugs.  The Welsh Government chose not to introduce a similar fund in Wales and Ministers here faced criticised from some quarters for this.

In the current crisis, there have been differences in the speed and way in which the four countries of the UK have eased lockdown restrictions and the question of access to care and rationing and triaging is being renegotiated daily and differently in different countries and hospital wards. What is noticeable however, is that whereas until this pandemic, healthcare policy across the UK focused on the cost to the NHS of missed appointments, overprescribing, or referrals, now the narrative is ‘whatever it takes’ with the UK Government’s Secretary of State for Health declaring that “money is no object” in the fight against Coronavirus (images below: gov.uk and Public Health Wales) and his counterparts in other countries taking a very similar line. 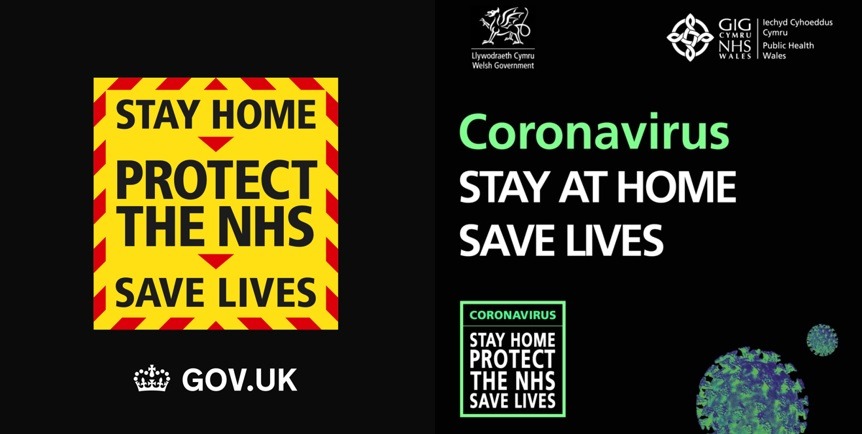 As the world begins managing the Coronavirus pandemic, it will be important to document how health services are transformed and consider the ways in which the NHS can recover. And it will be fascinating to see whether economics really has lost its grip on allocation decisions or whether the importance of cost-effectiveness will be reasserted as the threat to life recedes and attention turns to economic damage caused by the virus.

Clapping after Coronavirus: The implications of the Coronavirus pandemic for health and social care workers

The Coronavirus pandemic has turned the world’s attention to the work of our carers. Each week, many of us have been clapping to recognise...
Commentary 27 May 2020

The implications of the Coronavirus pandemic for the Welsh economy

The Coronavirus pandemic is having a profound and unprecedented impact on the Welsh economy – an economy already weakened by retrenchment and austerity in the public...
Commentary 12 June 2020

The role of Welsh local government in a post-Coronavirus world

The role that local government plays in the frontline provision of public services is highlighted and accentuated at times of crisis. Councils across Wales have...
Commentary 24 June 2020

Financial vulnerability in the pandemic: a dilemma for local authorities

The Coronavirus pandemic has necessitated a shift in the way in which we, as a society, think about vulnerability. Historically, we have tended towards a...