10th September is World Suicide Prevention Day. This annual event aims to raise the awareness of suicide, educate about the causes and warning signs of suicide and reduce the stigma associated with suicide, suicidal behaviour and other mental health problems.

According to the World Health Organisation close to 800,000 people die each year as a result of suicide. This is equivalent to one person every 40 seconds but is almost certainly an underestimate because suicide is often misclassified on death records, due to the sensitive – and sometimes illegal – nature of the incident.

Three times as many men die by suicide than women in richer countries and this has been described by some experts as a “silent epidemic” because of a lack of public awareness and policy debate about the scale of the problem and what can be done to address it.

As part of our 2019/2020 work programme, the First Minister has asked the Centre to look into trends in male suicide in Wales. This blog gives a brief overview of the current data.

Suicide in the UK and in Wales

The most recent statistical bulletin from the ONS reports that in 2018 men and boys accounted for three quarters of 6507 suicides registered in the UK. This has been a consistent pattern since the mid-1990s, and equates to 17.2 deaths per 100,000 males. 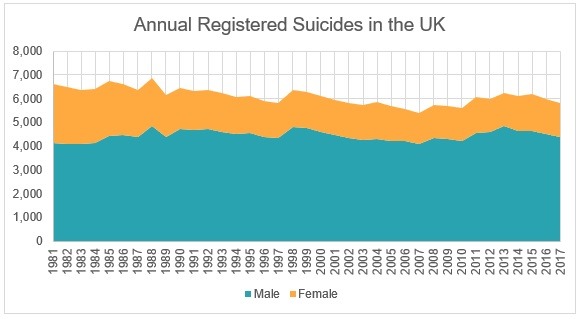 The ONS’s statistical bulletin on suicide in Wales since 1981 shows that there were an average of 300 deaths per year during the period, of which 76% were male. In contrast to the UK as a whole, the rate of male suicide has been increasing in Wales.

Men working in elementary low-skilled, caring, leisure and other service occupations and in skilled trades in Wales have a significantly higher suicide risk than others. This may be related to  low pay, job-security and risk of injury, and also access to and knowledge about highly lethal methods of suicide. The statistics also point to a link between suicide and deprivation.

Why are men three times more likely to die by suicide than women?

Experts suggest that the higher suicide rate among men is related to a range of factors.  In particular they have more lethal means of suicide than women, can be more reluctant to seek help, and are often more severely affected by relationship breakdowns than women. However, the cause behind why someone takes their own life is often cannot be reduced to a single reason.

A 2012 report commissioned by the Samaritans identified social change as a leading cause of suicides among 45-59-year-old males, referring to them as the ‘buffer generation’, ‘caught between the traditional silent, strong, austere masculinity of their fathers and the more progressive, open and individualistic generation of their sons’.

In 2015 the Welsh Government launched a five year Suicide and Self Harm Prevention Strategy, called Talk to me 2, reflecting the commitment by members of the World Health Organisation to reduce the suicide rate by 10% by 2020. This seeks to tackle the stigma of suicide, deliver appropriate responses and interventions, and support those bereaved or affected by suicide.

Launching the Strategy, Mark Drakeford, the then Minister for Health and Social Services, said:

“Suicide is usually in response to a complex series of factors that are both personal and related to wider social and community influences…. Suicide and self-harm prevention needs effective collaboration and joint working across central government departments, between local authorities and health boards, involving the third sector, service users and, of course, clinicians and professionals in a range of settings including schools, workplaces, hospitals and communities.”

The Strategy is likely to be renewed next year and ways of reducing the rate of suicides continues to a high priority for policy-makers in Wales.

If you are affected by the issues raised in this blog, call 116 123 to talk to the Samaritans.

How can governments engage with the public about healthcare?

How do we Tackle Loneliness? Evidence on Deprivation and Different Communities

How to alleviate loneliness for materially deprived people, and different interventions for different communities
Commentary 31 January 2019

What does the evidence say about loneliness in Wales?

Suzanna Nesom explores what we know about the concept of loneliness