Brexit and Wales: Understanding the Reasons Behind the Welsh Vote

On Thursday 30th March, 2017, the PPIW and Knowledge and Analytical Services welcomed colleagues to an evidence symposium which aimed to understand the reasons behind the Welsh vote in 2016’s referendum on EU membership. The event featured expert speakers from UK universities and research centres, providing a mix of short presentations with a broader discussion with Welsh Government officials about the implications of Brexit for Wales. 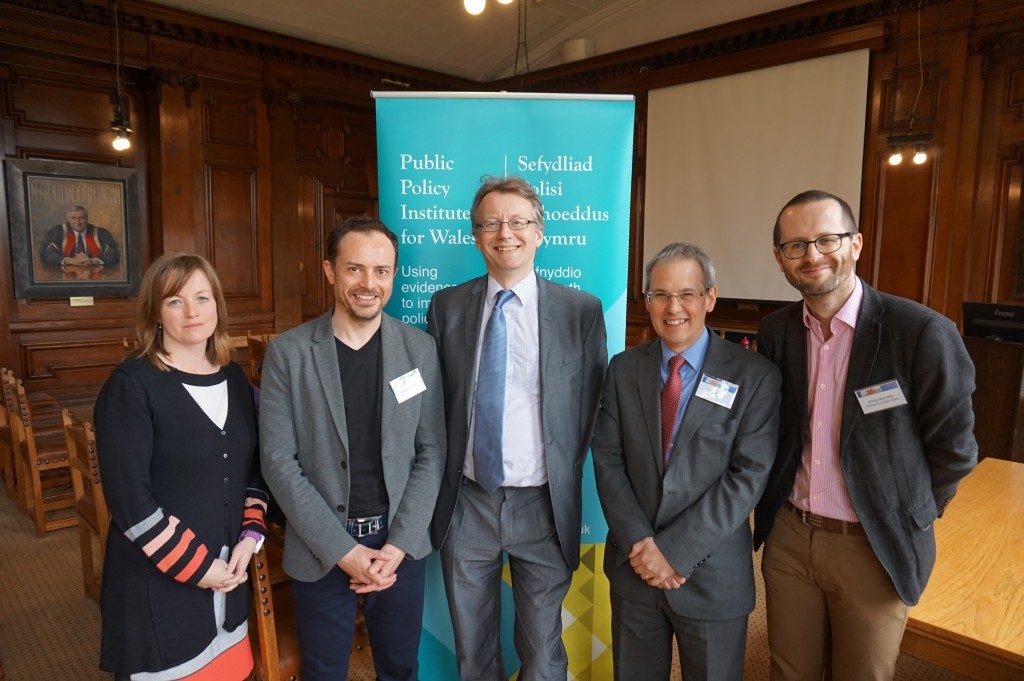 Our first session featured Guy Goodwin, Chief Executive of NatCen, and Professor Ailsa Henderson, Head of Politics & International Relations at the University of Edinburgh, to discuss the broader UK vote to leave the European Union and the implications this has for Wales.

Guy’s presentation reflected four key messages. First, that there should not be much surprise in how Wales and the rest of the UK voted. Prior to Brexit, 67% Welsh voters wanted immigration significantly reduced. Looking back further, to before David Cameron’s renegotiation, Wales had the highest proportion of support for leaving the European Union. Second, looking ahead to the Brexit negotiations, people want free trade but not free movement. This seems to be true across Great Britain. It’s also important to note that remain voters also want to curb free movement. The key question, Guy asks, is whether we are prepared to trade off free trade for free movement. Third, on regulations, Guy noted that while we appear quite cynical about regulations and red tape, we like clean beaches, we like cheap mobile phone calls, and we like airline compensation. Individual regulations remain popular. Finally, Guy reflected on the implications for public policy. People did not ‘get’ the Remain campaign’s messages about the benefits of EU membership, and this might be one of the causes of claims about not having enough information. Policymakers need to reflect on how policy is understood by the public.

Ailsa then presented attitudes from Scotland, and what this means for the rest of the UK. She discussed the ‘left behind’ narrative, and how this argument does not work so strongly in Scotland. Based on demographics, the Leave vote should have been higher in Scotland than it actually was. While levels of Euroscepticism are very similar in Scotland as in England and Wales, public discourse is different. The messages from politicians and policymakers is different in Scotland. It is also important to note that while the ‘left behind’ voter does exist in Scotland, that narrative appears to have been channeled more through the 2014 independence referendum than the 2016 Brexit referendum. On the implications for policy, Scottish public opinion data suggests that there is a keen interest for participation in the policy process through mechanisms such as participatory budgeting. Echoing Guy’s message about expertise, there now needs to be a discussion of the role of experts, expertise and evidence in policy making.

Our second session moved from the broader UK context on Brexit to discussions specifically about Wales. Why did Wales vote to leave? Why did so many still vote to remain? What was the breakdown of the vote in Wales? To answer these questions, we were joined by Dr Chris Hanretty, Reader in Politics at the University of East Anglia, and Professor Roger Scully, Director of the Wales Governance Centre.

Chris started by presenting his research on how constituencies in Wales probably voted in the EU referendum. The ‘probably’ reflects the fact that referendum results in Wales were not reported across the 40 parliamentary constituencies, but across the 22 local authorities. However, it is possible to reproduce these results at a parliamentary constituency level with a certain degree of confidence, which is of use to policymakers wanting to know not just which kinds of voters wanted to leave, but also which areas. Chris showed that 29 out of 40 constituencies probably voted to leave the European Union, with Blaenau Gwent and Swansea East probably having the largest share (62%). Chris then highlighted that many of the socio-demographic characteristics that correlate with voting leave in the UK also apply in Wales, suggesting greater support for the ‘left-behind’ narrative in Wales than in Scotland.

Roger provided the final presentation of the morning, asking the question: why did Wales vote the leave the European Union when it was apparently against its self-interest? He posed a challenge to the current political elites in Wales, who predominantly supported remain, by arguing that in Wales we are maybe not as outward-looking and European as we thought we were. Roger then reflected on the referendum campaign’s proximity to the Welsh Assembly elections, which meant that political parties and news media were thinly resourced and burned out by the time of the referendum. Roger argues that, as a consequence, there was barely a Welsh campaign in the EU referendum, and if there was it was directed from London. He concluded by showing that voting demographics in Wales were very similar to those in England, and that there appeared to be a strong Remain vote in areas with a high proportion of Welsh speakers.

Each of the speakers then joined colleagues in the audience to discuss how the Welsh Government can reflect the referendum vote in Wales. Discussions focused on how policy, and its benefits and implications, can be better presented and relayed to the public. These questions reflected points made throughout the day about the distinction between facts and evidence, and emotions and narrative. Questions were also posed about the dominance of Brexit on public policy, and how policymakers can actually respond to voters’ needs while handling the bureaucratic and administrative burden of leaving the European Union.

The event came to close with audience members across the board, from Welsh Government officials and Cardiff University colleagues, all reflecting their appreciation for a stimulating discussion about Brexit, and how policymakers can respond to public preferences.

Brexit and Wales – Land and Sea

This project explores the potential implications of Brexit on fisheries, agriculture, and rural areas in Wales.
Projects

Implications of UK migration policy on the Welsh economy after Brexit

Building on our previous work looking into immigration policy after Brexit, this project focuses on the likely impact of UK Government migration policies on the...